Carr Amps was an idea hatched in the summer of 1998 by guitarist and hi-fi geek, Steve Carr. Steve had the idea of using hi-end components like the ones in his home stereo to make his guitar amp sound better. It worked and soon he was applying the same idea to several amp concepts that floated in his brain and haunted his dreams as he waited tables part-time and ran an amp repair shop the rest of the time. The shop was a barn outside of Chapel Hill, North Carolina, and was without plumbing or any modern convenience aside from electricity.

The first model born in this manger of sorts was the Slant 6V, a flagship which remains in production today, claiming the top position among the models as the "Cadillac" of Carr Amps. The first dealer for Carr Amps was Indoor Storm in Raleigh, and soon many more followed. Over the years Steve introduced several models, such as the Rambler, Mercury, Imperial, El Moto, Hammerhead, Viceroy, and most recently, the Raleigh. All but two of these models are in production with a couple more in the pipeline, soon to be released to the public!

Through the years Steve has instituted refinements to some of the models in constant endeavor to make them the best they can be, but it bears saying that most of these models remain the way they were originally hatched, which is to say - perfect. Refinements have also spilled into the business in general as Steve added an in-house wood shop in 2004, making Carr Amps one of the only (if not THE only) amp makers to construct all their cabinets on the premises. The canny move of not out-sourcing anything to anyone put all the cabinet-work in the hands of Carr Amplifier's own craftsmen, to be checked and re-checked right along with everything else down the production line, sealing the deal on Carr Amps having the ultimate in quality control!

In addition to all this, it has always been important to Steve to have great customer service for his products. Rather than brushing off valuable customers to some bewilderingly complex labyrinth of number sequences, button-mashing, and robotic voices that just don't understand concerns, he likes there to be someone actually on the line to answer callers' questions. Imagine that! Carr Amplifiers decided the Jensen Jet Falcon 10" would be the perfect speaker for the 1-10" Sportsman. It was chosen for is clarity and vintage juice - very snappy with nice compression when pushed! In 2000 Steve uprooted Carr Amps from its Chapel Hill manger to a former chicken hatchery in Pittsboro, NC. 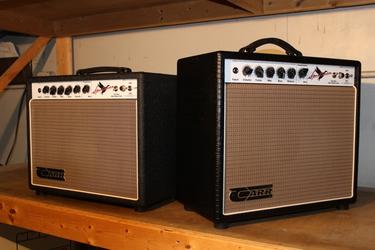 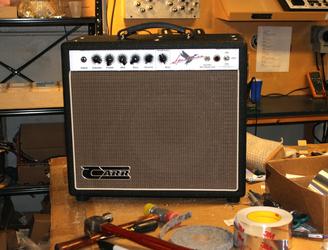