Thinking Out Of the Box

The innovative TOOB ultra-light guitar and bass cabinets were first conceived in 2007 when Markku Pietinen, a Finnish jazz guitarist and compulsive builder of things, began to look for alternatives to traditional speaker cabinets. He sensed that the trend toward lighter equipment, already evident among bassists, would eventually reach the more conservative world of guitarists.

Indeed, a new generation of excellent micro guitar amps has entered the market, and more are no doubt underway. Lightweight Neodymium speakers, notably Jensen's, have found their way to upmarket amps and cabs. However, those bulky plywood boxes housing the speakers remain virtually the same as in the 1960s, when Markku played rock'n'roll through his first self-made cabinets.

The name TOOB comes from Thinking Out Of the Box – in this case, quite literally. While on a walk, Markku spotted a piece of corrugated, double-wall plastic drainage pipe and picked it up. He found its stark, industrial aesthetics thrilling, the size about right to house a 10” or 12” speaker, and the weight/strength/price/availability considerations compelling. The rest is the usual story of trial and error, stop and go, prejudice, laughter and, finally, acceptance.

The first 2007 prototype was neither light nor a pleasure to watch or listen to. Finally, after some 40 variants, the concept crystallized in 2015-2016. The bespoke closing rims, which hold the assembly together with just two bolts, were the most demanding design task and a decisive breakthrough.

The market introduction in June 2017 relied entirely on social media. Fueled by positive test reports, TOOB has since made solid progress and found users in a growing number of countries. Pro players choose it for the tone, appreciating the feather weight and compactness as a welcome bonus. Finally a serious weapon for the urban warrior!

The two standard guitar versions, 12J (for Jazz) and 12R (for Reflex or Rock) are both loaded with a Jensen Tornado 12” speaker and weigh 4.0 and 4.5 kg (9 and 10 lb.) respectively. A telescopic Custom version for the traveling musician, 10T, sports a 10" Tornado. The newly introduced, half-open 12B bass version, still under 5 kg (11 lb.), defies just about every rule and conviction. Yet, it has rapidly gained popularity among both bass guitar and double-bass players.

Markku still assembles each TOOB by hand. This enables him to adjust the product to individual customers' wishes. Thanks to the unique design, a dedicated network of sub-contractors for various components, and the capacity of existing special tooling, moving up from boutique scale to higher volumes would be relatively simple. Given that the ubiquitous shell material is made to a global standard, the TOOB concept – protected by Finnish and EU design law – would lend itself to rapid expansion to new markets through licensing or franchising arrangements. 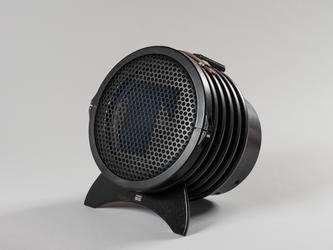 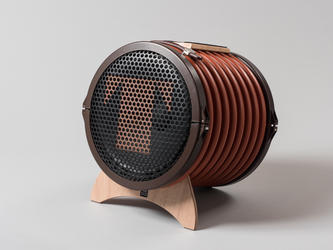 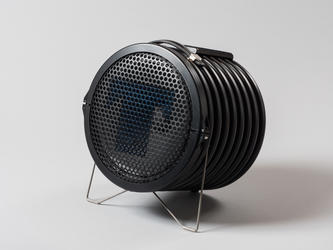